A pair of jeans is a pair of jeans, right? Wrong. And you don’t to be a denimhead to reach that conclusion: while the construction may be much the same from one pair to the next – give or take differences in thread standards and strength, cotton being traditional, a polycotton being much more durable – the real distinction lies in the fabric. And there’s no other way of saying it: American and Japanese denims are the best. It takes wearing a pair made of the “blue gold” to know it, and this can be an arduous process, given that raw denim requires some heavy wearing before it softens and starts to mould to your body shape. But experience is hard to argue with.

Does that make a stiff, dark denim the only choice? It’s a personal preference. Part of the pleasure of jeans is in making them yours; the shape and fades they develop are a unique product of your lifestyle. They reflect where you stow your wallet, whether you ride a bike, how many squats you do each morning, and the like. The best jeans in your wardrobe will always tend to be those you’ve worn the most.

But some people don’t want to wait. It’s for this reason that many kinds of washes (treatments that advance the ageing process) have been developed over the years: stone-washing (so-called because it literally washes the jeans with ground pumice), snow-washing (using acids) and the like.

But heavy pre-distressing – the artfully placed rips and worn patches (artfully placed in identical spots on a thousand pairs, that is) – is best avoided. For one, artificial fading processes have largely been environmentally bad news, not to mention detrimental to the health of the people employed to do the work; that’s why they’re using lasers to achieve the same finish these days. And for two, it rarely looks authentic. Some distressing is done convincingly. Most of it is not – putting fades and rips where they would never occur through actual wear, for example.

How Should Raw Denim Jeans Fit?

How your jeans fit, of course, is a matter of preference but arguably it follows the same philosophy: avoid the extremes. Yes, baggy styles are trending in men’s fashion, but look back to the Madchester years or early 1990s hip-hop to see how that worked out. And, yes, you can find skin-tight styles – the type beloved by men who typically also opt for T-shirts with extremely deep V-necks. But neither of these extremes tend to be that versatile. Indeed, there’s a good reason why Levi’s 501 cut (either the 1944 or the 1947 version) has been the most widely copied in jeans-making history: because its medium-rise, straight-leg silhouette works with just about everything. It’s sufficiently loose to look the part with sneakers and a sweatshirt; sufficiently trim to look the part with loafers and an Oxford button-down shirt.

That conceded, your choice is then down to the plethora of tiny details that make one pair speak to you when another almost-but-not-quite-the-same pair doesn’t: the colour of the stitching thread or the selvedge trim; the artwork on the leather patch; the type of buttons; the shape and size of the back pockets; the design of the arcuate (the brand-specific decorative stitching over those back pockets); and so on.

Don’t know where to start? Try the brands below – each of which is renowned for its raw denim jeans. Edwin was established in Japan by a one Mr Tsunemi during 1947. His motivation: a strong passion for denim, and a desire to import jeans directly from the United States as there was no denim manufactured in Japan at the time. It wasn’t until 1961 that Edwin began manufacturing its own denim. Today, the brand blends its Japanese heritage and dedication to craftsmanship with a contemporary European twist.

Edwin’s ED-80 Slim Tapered Jean is Ape’s pick. Coming in unwashed raw denim in a deep shade of black, they feature red selvedge detailing, a button fly, five pockets and are trimmed with a branded leather patch at the rear. 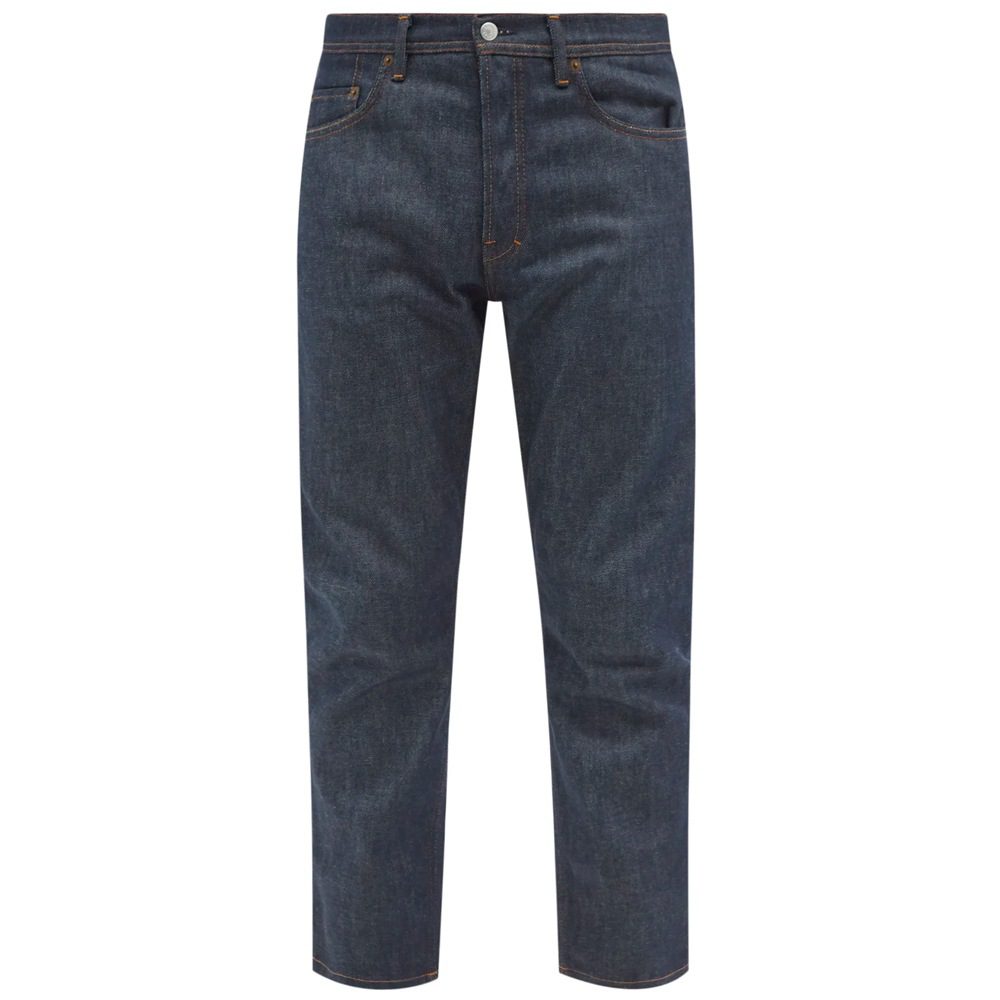 Founded in 1997 by Jonny Johansson, Acne Studios (‘Ambition to Create Novel Expressions’) offers high-end denim in rich colours with premium metal hardware. Its Max Slim and North Slim jeans feature a smart, streamlined fit that are ideal for smart-casual looks and are crafted from raw denim that’ll age and break in nicely over time. This Swedish label’s minimalist approach to wardrobe stocking has resulted in some of the best basics money can buy. The brand only makes what it deems to be true wardrobe staples and invests the rest of its resources into making them as good as they can possibly be.

Naturally, raw denim jeans feature in the label’s tightly curated collection. They’re made in Italy using only the highest-quality fabric and, thanks to ASKET’s direct-to-consumer business model, they’re considerably more affordable than similar jeans would be elsewhere. The clue is in the name when it comes to Japanese label OrSlow. The brand was born out of frustration with the disposable nature and unrelenting pace of modern fast fashion, aiming to counter this by producing quality garments made to stand the test of time.

Each and every piece is made in Japan using specialist equipment and locally sourced material and the resulting quality puts OrSlow’s raw denim right up there with the very best the world has to offer. Where it all began. Levi Strauss’ iconic brand pioneered jeans in 1873, setting the standard with its signature “501” style. Unrivalled branding coupled with first-class quality and construction make Levi’s an inevitable pick, even today.

The label’s 1947 501 was the jean of a new generation after World War II, when raw materials became available again, and Levi Strauss & Co. leapt back into heavy production to meet growing demand. The present day 501 features a slimmer fit and no extraneous details like the cinch or suspender buttons, but does boast watch pocket rivets and selvedge denim from Cone Mills of North Carolina – a Levi’s brand partner for over 100 years. Nudie Jeans is based in Gothenburg, Sweden and has specialised in premium denim since it was founded in 2001. High-quality craftsmanship, affordability and a focus on sustainability and ethical production methods make this well-known denim label ever popular. A variety of fits, styles and sizes means there’s a pair to suit every guy.

The Scandinavian brand’s ‘Grim Tim’ jeans are a highlight. Crafted in Italy from organic dry denim, which will soften up and break in over time, they come in a slim fit with a hint of stretch to ensure day-long comfort. Few brands have more clout and heritage in the world of raw denim than Evisu. This Japanese company was one of the original Osaka Five – a collective of denim brands that pioneered raw denim in Japan – and is still a key player to this day.

The label is known for its impeccable quality, streetwear appeal and the iconic hand-painted logo which adorns the back pockets of its jeans. Originally launched in 1996 as the in-house label of Okura, an ultra-hip menswear store in Tokyo, Blue Blue Japan is a label built around denim and the art of indigo dyeing. Drawing inspiration from both mid-century Americana and traditional Japanese garments and symbolism, the brand produces unique garments which use indigo dye in unusual and innovative ways.

Naturally, raw-denim jeans feature heavily in the label’s collections, and are all made in Japan using traditional techniques to the absolute highest of standards.

To Wash Or Not To Wash

Of course, discussions about washing denim may be moot to most denimheads. Why? Because they don’t wash denim, or at least only reluctantly.

So-called ‘dry’ denim – that’s the deep-shaded, stiff variety that untreated jeans are made from – should, they say, be worn for as long as possible before receiving their first wash. And by as long as possible they mean around six months. This allows for the maximum personalisation, from creasing to natural fading, of the denim’s fabrication and for the indigo dye to be ‘locked in’ first.

For the same reason they recommend that no attempt is made to clean local spots during this time: it simply creates a bigger, more distinctive patch that can last for years of wear.

But there is the matter of hygiene to consider. Again, there are sprays available to kill the bacteria. Others suggest hanging your jeans out on the line for a few days in bright sunlight – sunshine being the best disinfectant, as the saying goes, as well as helping to age your jeans faster, if that’s what you want. Others still recommend wearing them for a dip in the sea, the salts having a similar effect. But these methods are only really of use during the warmer months, and they’re all only putting off the inevitable.

How To Wash Your Raw Denim Jeans If you must wash your jeans – and most of us will recognise the need to do so at least once in a while – experts argue ardently that even here there are some definite dos and don’ts, even if they don’t necessarily all agree. Some say jeans should only be washed inside out: this exposes only the softer weave of the inside of the jeans to friction against the washing machine drum, sparing excessive wear to the outer, visible side. Some even recommend washing them right side out inside an old pillow case.

Either way, your jeans should be washed with as little other clothing as possible, on a short cycle, and using a minimum amount of bleaching agent-free washing powder (or even a small amount of mild shampoo). Despite the standard ‘wash at 60°C’ label, wash them on as cold a setting as possible.

Unless your jeans are Sanforised – a process developed in 1930 by one Sanford Cluett, which reduces jeans shrinkage to almost negligible levels – dry denim will shrink by up to two inches in the waist and three in the leg once washed. Hence the shop staff’s advice to buy big. Shrinkage will continue in unsanforised denim for the first few washes too.

Before making any permanent alterations to dry denim you also need to allow for natural shortening, which occurs through the gathering of creases at the crotch and knees. Once washing is done, your jeans should be removed from the machine straight away, turned back the right way for drying, shaken flat and pulled back into shape while still damp = at which point shrinkage can be countered to some extent with a good tug – and left to dry unfolded and naturally. No tumble dryers please.

Care for your jeans could, in other words, become a full-time job. Even repairs are an issue. Denim should be repaired only with a patch of the same kind (dry with dry, pre-washed with pre-washed), so as to avoid a crinkling effect when you next wash them. As for darning: you should – and, naturally, you already knew this – use a cross-weaving of not one but two shades of blue thread that together match as closely as possible the blue of your denims.

Yes, you can bet cowboys didn’t have this much trouble. It’s tempting to believe they would have found such denim care rules verging on the ridiculous. They’d have chucked their jeans in their washing machine – if they even had one – as and when was required. And they’d have focused their energies on wrangling, hustling, gun fighting, or robbing trains. And, no doubt, they’d have looked extremely stylish while doing so.

Top 5 Most Expensive Cars Ever Sold

The Best Designer Sneakers Brands In The World: 2020 Edition